Beginners Pilates – How It All Began, The History of Pilates 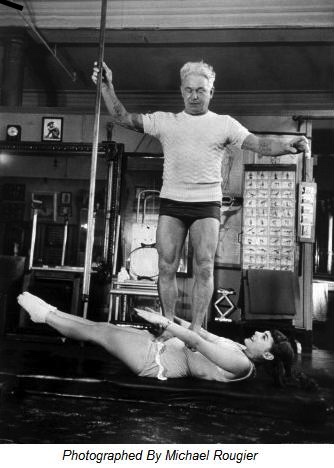 Did you know that Pilates is named after the man and founder – Joseph Pilates?

Joseph Hubertus Pilates was born a sickly child near Dusseldorf in Germany in 1880. He had many ailments including asthma, rheumatic fever and rickets – he was told by doctors that he would probably not be able to walk when he got older. This spurred him on to build his strength and overcome his various debilitating conditions. He took up many different sports including boxing, gymnastics, skydiving and bodybuilding.

By the age of 14, he was fit enough and had a good enough physique to pose for anatomical charts. He was determined that he should not be held back by his conditions and strove to develop his system, which he did until he moved to England in 1912.

His impressive physical fitness enabled him to make a living as both a boxer and a circus performer. When World War 1 broke out, Pilates was interned on the Isle of Man, due to being German. He spent his captivity nursing and training the other inmates with his system.

During this period there was a flu epidemic and whilst other camps suffered massive fatalities, Pilates’ camp suffered none – this has gone down in the annals of Pilates history.

See my blog post for further reading on this.

He was transferred as medical aid and went to work in hospitals. Pilates began to improvise fitness equipment with bed springs attached to patients walls above their beds – the beginnings of the reformer and other apparatus. During his life, he called his method ‘Contrology’ it was only upon his death that it became known as ‘Pilates’.

After the war he returned to Germany and taught boxing in the newly formed German army, he didn’t like the way Germany was going, so he moved to the USA in 1926. He set up his studio in New York, and his technique took the dance world by storm – it is said that every dancer in New York including the Martha Graham Company, took instruction in his technique.

He was known as a character, quite abrasive and he always wore bathing trunks, smoked cigars and drank beer. In his book ‘Caged Lion’ by John Howard Steel he recalls Pilates made everyone have a shower after their session and he often appeared in the shower with a scrubbing brush and scrubbed his clients down – you won’t find me doing that!

Pilates wrote the book ‘Return to Life Through Contrology‘ where he details the original 34 mat exercises, but that was just a small part of his repertoire. All of the apparatus exercises and his system was never written down, but he did have a few trusted teachers who worked with him and his wife ‘Clara’ in his studio.

When Pilates died in 1967, he left no will and no successor to carry on his work. His wife, ‘Clara’ continued to run the New York studio, and Romana Kryzanowska, a former student, became its director. There was no official school for Pilates teachers, Clara continued to give instruction and a few of her students went on to open their own Pilates studio’s, and that’s how the method has continued and been passed down to today.

Pilates was highly critical of the pace of modern life, and he believed that it was responsible for people’s mental and physical problems – this is why his ideas are highly relevant today. He thought that the world should be practising his methods, and it would make it a better place. I’m inclined to agree!